Visit of Sauvetat-du-Dropt and its 23-arched bridge!

La Sauvetat-du-Dropt is a cute little village of 600 inhabitants, which sits by the river that gave it its name. Bordering with the Dordogne (north of Lot-et-Garonne), not far from the village of Eymet and the town of Miramont-de-Guyenne, it is a calm and friendly stopover, punctuated by a very interesting guided walk by historical and tourist information panels. The highlight is the sumptuous 23-arched Romanesque bridge over part of the Dropt. We take you to visit Sauvetat-du-Dropt , to discover some of its treasures before going there yourself!

Organize your visit to Sauvetat-du-Dropt

Follow the visit of the “ Village over the centuries ” equipped with your Smartphone, by scanning the QR codes all along the route (1.2km, perfect for families). This walk was prepared by a local association, because the village is today a dynamic town and whose inhabitants are keen to promote the beautiful heritage. To facilitate this journey, you can get a map of the walk at the Tourist Info Point which is located in front of the mini-market, near the Town Hall. Or download it here and print it, like I did. If you want more spontaneity, you can also simply stroll at random through the pretty alleys. The village being small, impossible to get lost and the seasoned eye will be able to decipher the stones and notice the historical details in the small alleys.

For English-speaking visitors, be aware that the tour is also translated into English! It is also a small greeting to the past, since the Sauvetat-du-Dropt carried the English standard in the 14th century!

Follow the signs, collect or print the Sauvetat-du-Dropt visit plan

A little history to contextualize

La Sauvetat-du-Dropt was once a Sauveté, that is to say a refuge area, protected by the Catholic Church. One could not pursue the fugitives there, it was a place of asylum, created by the monks in the Middle Ages (in this case in the 6th century, by monks of the order of Saint-Benoît). It is a city that prospered, as evidenced by the ramparts that surrounded the city, as well as the ditches dug to ensure its defense. Along the village, some old houses and remains are still present, unfortunately not as many as one might hope because in the 17th century, the Revolt of the Croquants gave rise to terrible battles and the city literally disappeared from the map.

The city was surrounded by ramparts, lined with a ditch

Remains of the site of the surrounding wall, near where there was a priory, behind the church

Walk in the village of Sauvetat-du-Dropt

From the start of our walk, we come across an old hospice, dating from 1843, with beautiful half-timbering and half-timbered walls lined with cob. The houses are very well restored in the village and pleasantly flowered. Have you noticed that wooden half-timberings are often on the upper floors? This is to protect the structure from humidity, which is therefore built in stone on the first level. The cob is a mixture of clay soil and straw, which was used to fill the wooden frame. The straw acts as an insulator and a binder to prevent the soil from cracking as it dries.

The walk starts at the mini-market, go towards the bridge

The old hospice and half-timbered houses

Another example of a well-restored medieval house

We cross the main road to go to the other side of the village towards the rue du Temple which was once the street where the blacksmiths worked the metal in their forge, to elaborate all kinds of objects and in particular weapons and elements. for agricultural machinery or carts. Looking up, we see a house higher than the others, it is the tower house, probably an old watchtower in medieval times.

We continue the walk in the pretty alleys, always with a beautiful view of the Saint-Germain church which is one of the highest in the department. We revolve around it as a pivot point, because it is around it, built in the 6th century, that the Rescue develops. Behind the church, which was attached to the priory of Sarlat (Périgord is very close), is a square where the remains of the priory have been found. Enter the church to walk through its long nave and admire its 12th century Romanesque choir.

Walk in a pretty village

Pretty alleys and still, the church in the distance

The portal and the interior of the church

The 29m bell tower and the stained glass windows

The stroll then takes us to make a good history, until the middle of the XVIIth century. Do you know Jacquou le Croquant? Famous rebellious peasant from Périgord, whose condition and demands were made famous in the novel by Eugène le Roy, then in a television series in 1970 and finally a film. The whole southwest was shaken by the Revolt des Croquants (the peasants). We are in June 1637, the population is harassed by dozens of years of taxes and the abuse of privileges, it rebels and 2000 of them take up arms, facing 3000 soldiers from the Royal Army who have come as reinforcements. The city is a real battlefield, it is devastated and the crunchies are subdued by force, 1600 perish and the city is nothing more than a field of ruins… Take a walk in the meadow to soak up these historical facts. Continue on this side of the village to visit the church if you haven't already and then return to the bridge.

Towards the place of the old priory

The Dropt and its 23 arched bridge

We are now heading towards the start of our walk, back to the bridge over the Dropt. Have fun counting, there are 23 arches and even 24, since in 2016, the local heritage protection association discovered a new arch, never mentioned in the archives. Astonishing! 23 arches is very long and today most of them are buried in vegetation. One has to imagine that at the time of the construction of the initial Romanesque-style bridge in the 12th century (with 11 arches), then its extension in the 13th century (12 additional Gothic-style arches), the Dropt did not have to be all that physiognomy. It was much wider, because it was not very channeled and the floods were frequent and memorable. In the middle of the bridge, you will notice a lock (and a mill behind), which was built after the destruction of an arch, in order to make the Dropt navigable. A late operation, a decision that quickly collapsed with the development of roads and railways for the transport of goods, rendering navigation obsolete… It only took place from 1858 to 1884.

Yes, there are 23! We also see the lock devolved to the (very short) period of navigation of the Dropt

Here we are at the end of our lovely walk. This article was written with the help of the website of the village of Sauvetat-du-Dropt (in french and english), which I recommend you visit because it provides invaluable historical information, from testimonies, archival research, to understand the past of the village and therefore better honor it in the present. It is a success! Come for a walk with your family in this pretty peaceful place, which has everything you need to receive you for a few days or a half-day with a picnic near the bridge!

A rural and restful environment

Lauzun: a picturesque village, an ancient duchy to explore on foot

Lauzun: a picturesque village, an ancient duchy to explore on foot

Castles to visit in Lot-et-Garonne

Castles to visit in Lot-et-Garonne

Lac de L'Escourou is a dam and irrigation lake in the town of Eymet. It is a very large water reservoir of nearly ...

In Miramont-de-Guyenne, the Lac du Saut-du-Loup is a lake full of fish and a fishing spot. A lake path allows you to ... 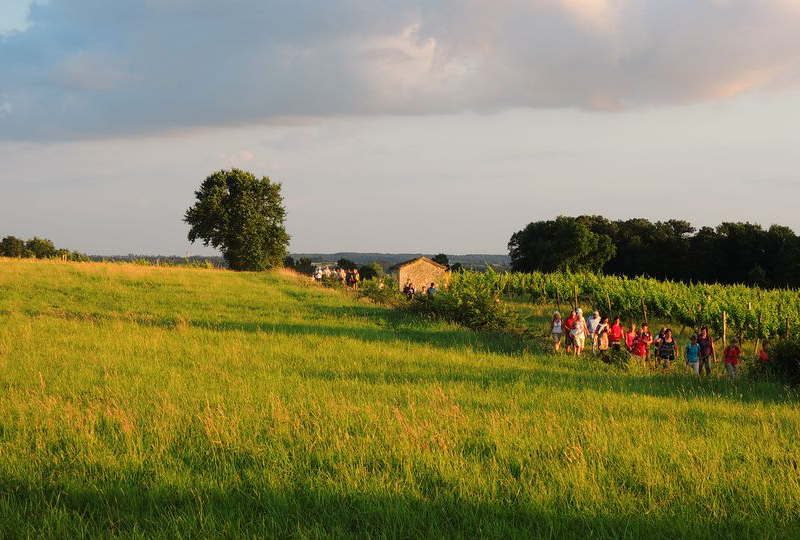